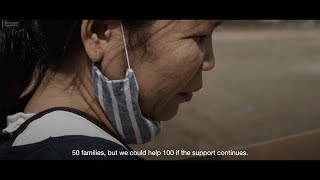 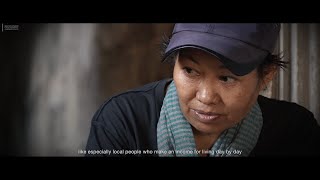 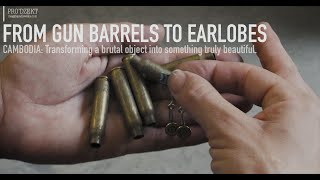 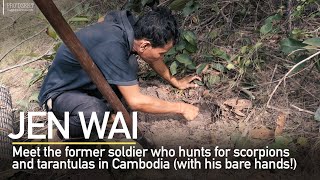 THREE DOLLARS AND A BUS RIDE THAT CHANGED A WOMAN'S LIFE: MEET THYDA

“Three dollars…it’s all I had in my pocket" says Kolthyda Chum, an incredibly charming, petite and softly spoken young woman from Phnom Penh, Cambodia. "My mother would not lend me the 10 dollars I needed to buy the bus ticket, because she told me that people like me need to stay at home with family.”

But Thyda, as she likes to be called, took her chances, and boarded that bus...

“When I was two years old, I became very sick. I got polio in my right leg. My father took me to the hospital, but doctors and traditional medicines didn’t help me” she says.

Today, sitting up straight and proudly, with her crutches leaning discreetly on the side of her desk at a shop in Siem Reap, Thyda begins to tells me of her incredible her life story…

“When I turned six years old, I couldn't walk, but my father took me to school. He carried me there, in his arms, every single day. Up, over and around a mountain for about two kilometres. He would sit me down on a chair in the classroom, and return to get me when we finished our lessons.”

The memory of Thyda’s father, who passed away in 2008, a year after she lost her grandfather who gave her the crutches that eventually allowed her to move freely, clearly shines through the eyes, stories and successes of his wonderful daughter.

“He once told me” she says, “please keep those words to be your power! Don’t be angry, and continue.”

Those words, she then tells me, were in reference to the ones uttered by members of her very own family. “Don’t bother studying because you won't get a job” Thyda quotes her cousin, “don’t get a job, because you can only stay at home, maybe as wife and a mom…. you have a disability!” she adds, “I went home, and I cried.”

Pausing for brief moment, she then begins to nod her head up and down slowly, “September 8th, 1999…” she says. “That was very special day” she continues, “it’s the day I showed up for my very first shift on the job as a secretary for the Banteay Prieb Vocational Training Centre in Kandal province.”

But Thyda’s meticulous memory for dates, appears to have more to do with the significance of her employment, than the job itself. “It’s the day I won, against the words of my cousin…so, I remember that day very well” she continues as her eyes widen and her lips begin to form a contagious smile.

Since then (that very first job that not only allowed her to save up a little money, but to continue her dreams of going to school), Thyda started and managed three successful businesses. "I opened a small shop near a factory where I sold drinks and rice. My sister joined me, and cut hair. All the money I made at that shop, I gave to my mother" she said.

Not only did Thyda become a significant breadwinner who supported her family, she also put her younger sister through school, singlehandedly raised her now 16 year old daughter following the divorce from her husband in 2008 and, as of a year and eight months ago, is now caring for another.

But when business slowed in the capital, Thyda, despite having pursued her studies in management became unemployed, or as she then hinted - unemployable.

"They don't give papers and jobs to people like us" she said.

Sadly, this has become an an all too familiar story among some of the amazing people I've had the privilege of meeting here in Cambodia; including Muy Seu Bel, the founder of the Khmer Independent Life Team (KILT) who told me he couldn't get hired (despite having studied at a university) as a landmine survivor who lost his leg at the age of seven.

"I wasn't sure what to do" said Thyda, "then, my phone rang." That unexpected phone call was from a friend she hadn't spoken to in years; a friend, who then offered her a job, miles away from her home in the capital. "Come to Siem Reap she said" Thyda recalls.

Inspired by the words of her late father, Thyda decided to take her chances and board a bus with barely enough money for a single meal. "My friend said she would meet me when I arrived in Siem Reap" she said, ultimately, having to trust in that while dismissing her cousin's haunting words that used to make her cry, the discrimination that she endured in the big city, and the pain of her mother's disapproval.

That friend did meet Thyda at the bus stop on that day, paid for her bus fare upon her arrival, and helped her find a job.

"I got a job at an orphanage" she says, "which I then had to leave because I saw bad things." Thyda witnessed the worst; the abuse of power towards young female orphans by the centre's director..."was the police contacted?" I asked, "yes" she replied without wanting to go into further detail.

Thyda then volunteered with an NGO helping kids with mental disabilities, and eventually took out a loan to once again start her own business. "I started and managed a sugarcane and soybean plantation" she said, which was later destroyed by a fire that was ignited by a neighbour.

But despite having agreed and signed all the necessary papers, "including with thumb prints" she explains, Thyda had once again lost all the money and investments she had made and worked so very hard to achieve. Unable to afford the illegal payout demanded by a land official, she received a mere fraction of the compensation that she was promised. Thyda's crops and business were lost.

She parted with her motorcycle, washing machine (which she bought with the intention of starting her own laundry business), and her newborn's birth necklace to compensate her landlord for the monthly $60 rent she could no longer afford to pay.

But Thyda, as you may be getting to know and understand a little more by now, is a woman of unstoppable force.

Though far too modest to react to my watery eyes and the goosebumps that appeared on my skin as I reached out my hands towards hers, her glance, spoke loudly enough. Thyda is well aware of what she has accomplished and the obstacles she continues to overcome.

With her courageous and bold decisions, her hard work, dedication, and the risks she took when she got on that bus that led her away from an environment that suffocated her potential and dreams…she’s glowing now, knowing full well that she is living HER life.

"I never asked my ex-husband for any money to support my child, I worked and I continue to work hard...I did get my baby's necklace and machine back" she says.

Thyda has once again reinvented herself, creating and selling her own beautiful line of jewelry infused with messages that seek to empower women from all walks of life.

Dear Thyda, from the brief story that you’ve so kindly shared with me - I think we can all agree, that your beloved father would be proud!

THANK YOU THYDA FOR YOUR STRENGTH, COURAGE & INSPIRATION!

Please visit Genevieve’s Fair Trade Village during your next visit to Siem Reap to support Thyda and other amazing artists like her.